Pattonville school board votes to roll back residential tax rate

The Pattonville Board of Education on Sept. 28 voted to reduce the tax rate for homeowners by 18 cents for the 2021-2022 school year. Personal property and commercial property tax rates were also reduced by 18 cents and 13 cents, respectively.

School boards in St. Louis County set tax rates each year for four classes of property within school district boundaries: residential, commercial, personal and agricultural. The board is authorized by law to levy up to a certain amount previously approved by voters, but must roll back its operating levy when growth in the value of property in the district (excluding any new property construction) exceeds the consumer price index, which is 1.4%. The value of residential property grew by 10%, while the value of commercial and personal property dropped slightly in Pattonville. The overall increase for all property in the district was 3%, but Pattonville’s operating revenue will only increase by 1.4% due to reductions in residential, personal property and commercial tax levies.

Also important to note is the fact that Pattonville’s residential rate will continue to be lower than the rates for agricultural, commercial and personal property, as promised to voters when they approved the Proposition P tax rate increase in 2013. At the time of the election, the district promised to limit the residential tax rate increase for as many years as possible. Proposition P allowed the district to levy up to 99 cents, but the district has kept its commitment during the past eight years to maintain a lower residential tax rate.

Approximately 86% of Pattonville’s revenue comes from local sources, which include taxes paid on property in the district. These taxes are based on the assessed value of the property, as determined by the St. Louis County assessor’s office. Pattonville is keeping careful watch on its revenues and expenditures, which have been negatively impacted by the COVID-19 global pandemic. While some of the loss has been offset by federal pandemic relief funds, the district is also anticipating a $2 million loss due to a state lawsuit. In March 2021, the Missouri Court of Appeals Eastern District ruled a method used by the Missouri State Auditor’s Office (SAO) to determine voter-approved tax increases was incorrect. The recent court decision changes the long-standing SAO interpretation, and the district anticipates losing $2 million in revenue in 2021-2022, and $1.5 million in subsequent years. 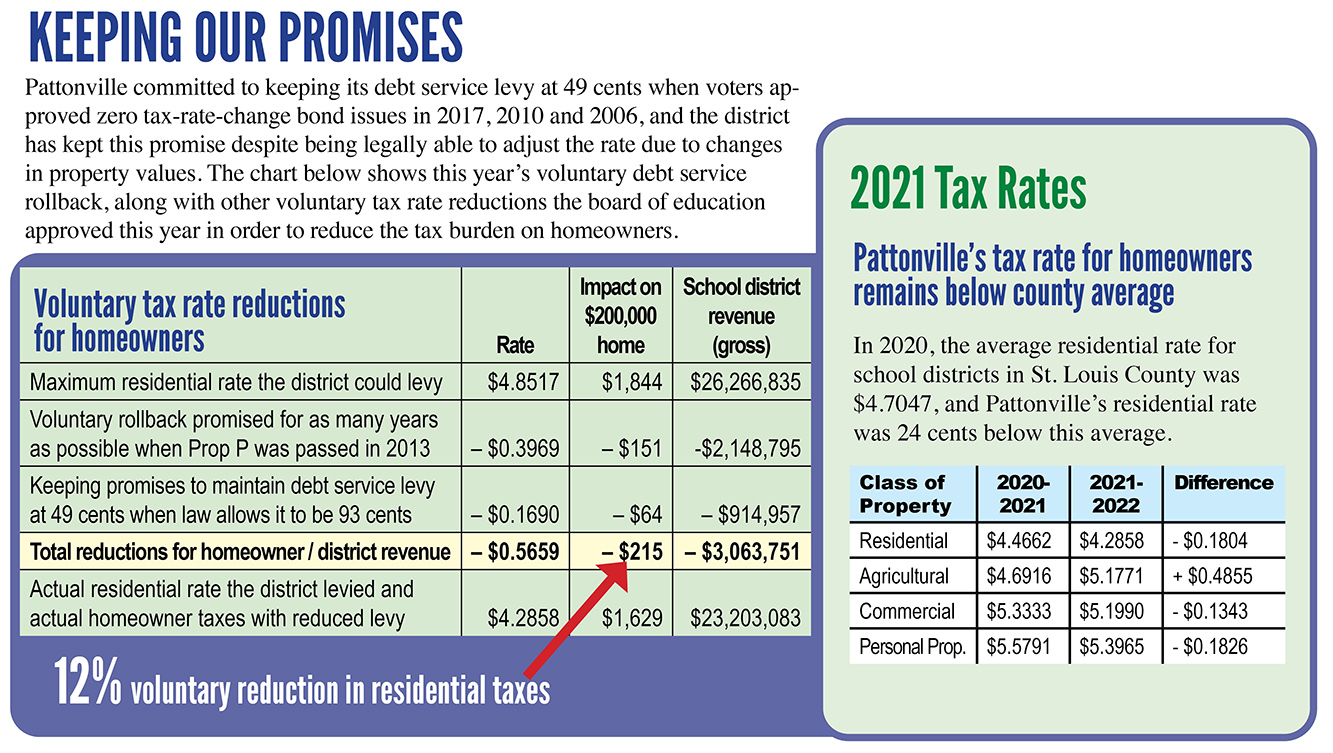